Brown the ground meat in the olive oil in a large skillet. Meanwhile, chop the bell peppers into ~ 3/8" cubes after removing seeds and pith. Once the meat is no longer pink, add peppers and the package of seasoning. Chop the tomatoes the same size as the peppers and add them. Cook for ~15 minutes over low heat until the peppers and tomatoes are tender and have released their juices. Stir in the refried beans, mixing thoroughly.

1 box pasta (elbows or similar, your choice of dreamfields, quinoa, regular wheat, etc)
1 stick butter
1 pint half & half
1 pound shredded cheese (mexican, or a mix of cheddar and mozzerella)

Cook pasta as directed, leaving it a bit al dente as it will cook a bit more in the oven. Drain pasta and set aside. In pasta pot, combine cream and butter and warm over low heat, then add the shredded cheese. Mix thoroughly until you have a uniform sauce, then add the pasta back and stir to coat evenly.

Coat a 9x13 pyrex dish with cooking spray, then add the cheesy pasta, distributing to an even level. Add the meat, veg, and bean mixture and smooth out evenly. Top with a parmesan/romano and 1/2 pound of shredded cheese. Place on a baking sheet to catch any drips, then put into a 350F oven for about 30 minutes, until everything melts together and there is some browning on top. Let this sit and cool for at least 10 minutes so it doesn't fall apart on slicing. Makes 8-12 servings depending on hunger levels, and is a complete meal. We leave leftovers in the pan covered with press & seal or if we're not going to eat it all in a few days, slice and wrap in individual portions then freeze in a freezer bag for up to 3 months.

Notes: you can make this with gluten free pasta, skip meat and replace with mushrooms or meat substitute, make it vegan, etc.

Mmmm... this one was dreamfields penne with ground turkey. Not fancy but delicious, filling and fairly healthy. 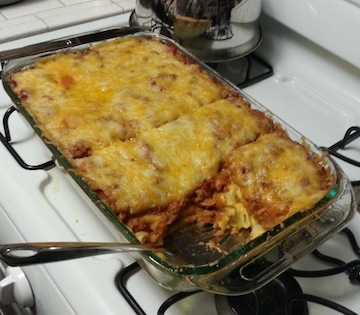