First full length photo courtesy of https://www.facebook.com/lou.capuano. It was taken before the costume contest at Bent Con on Saturday; I'm hoping there will be more later as loads of people took pictures, including some with other cosplayers - the new Thor, an incredible Skeletor (he won the costume contest), and loads more I've already forgotten. 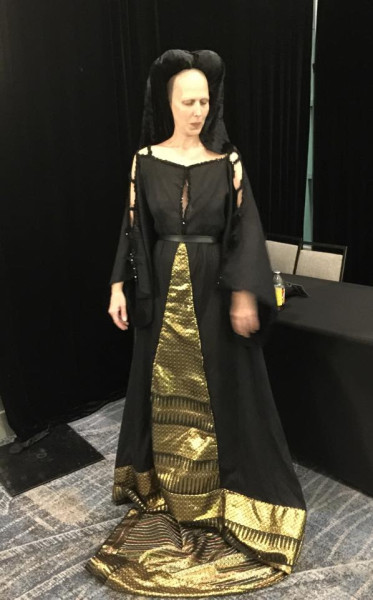 And I had multiple questions this weekend about how I made it so...

The sheer striped cotton and the velvet for the headpiece were some of the many remnants I've picked up over the years at the Lip Service warehouse sales - I rarely buy finished clothes from them, but the rolls of fabric leftovers are awesome. The gold was from the fabric district, it's specifically a shop that specializes in African sourced fabrics; I think from Kenya in this case, but I'm not sure. And the trim is leftover from another cosplay project - rounds of satiny cord with sequins which had to be hand-sewn (bleh - not my strong suit).

The headpiece was shaped of 1" foam with a bent coat-hanger inside to give it the curves, and gaff tape wrapping to reinforce the shape and stiffness. It's a bit tight around my head, but it also stays on no problem. After I got the shape, I covered it with the velvet, using some gathering in the center front to keep the valley between the curves sharp; there's also a layer of batting and velvet lining inside so the shape doesn't get wonky because my head is sticking through the frame. If I wear this again, I'll probably re-visit the headdress - I'm not entirely pleased with the way the form fits or it's smoothness under the velvet, and I'd like to be able to wear it longer without a headache.

The dress itself is a modified chiton - two pieces of full width material attached at the shoulders/arms and sewn up the sides: http://www.dl.ket.org/latin1/things/romanlife/greekdress.htm. I wasn't happy with the way it was hanging around the waist and it didn't replicate the movie stills as well as I wanted so I nipped in the waist to under my arms, separating the sleeves from the body of the dress. The gold starts as an overlay, but once past my hips, it is used as a gore to widen the front lower portion of the dress, and at the bottom to lengthen it further. The train is gathered in the center back and runs about 5' from the bottom of the main dress. I'm really pleased with everything except the belt - I need to re-make that with real leather and add the tassels that were front and center in the film version, but I worked with what I had in the stash of pleathers we'd been gifted.

Overall, I really enjoyed making this and how the finished product turned out, even if there are things I would change. I'm not bad at this stuff, but I've had no training except occasional hints from friends which means all my cosplay (and clothing making in general) is of the try it, make it work, go back and re-do the things you want to later. Thank fuck I have a good eye for fabric and lines or none of my stuff would look okay.
Collapse